The City of Helsinki organised the ‘Lights over Kruunuvurenranta’ design competition for the artistic lighting of the new Kruunuvurenranta residential area. The competition was part of the World \design Capital Helsinki 2012 programme which aimed to promote the cities development through design. On 10 October 2012 West8 with Speirs and Major designers working with light had been announced the winner of the Lighting Master Plan for the future Urban development Kruunuvurenranta in Helsinki.

On the site of a former Oil harbour, a new residential development with some 10,000 dwellings will be constructed. The Lighting master plan will give guidance to the development of Kruunuvurenranta by creating a functional lighting plan and introducing an attractive nightscape seen from a distance.  Both the proposed landscape and illumination plan anticipate on the natural sources in terms of quality of darkness, use of local materials and site heritage.

By emphasising the natural scenery, a strong sensation of being in Kruunuvurenranta will be created. The water surface provides a highly reflective foreground which when fluid will create a broken, animated reflection of the lit image of the waterfront – in effect almost doubling the perceived quality of light present when viewed from across the water. Light will therefore be minimised and be used sensitively to reveal gateways, heritage features and selected neighbourhood lantern pegs.

The plan also referred to the appropriate colour temperature of the light source during the darkness of the long winter nights and how this can affect our activities, moods and behaviour. The City of Helsinki had been looking to try out this innovative approach and worked with OrangeTeK to develop a luminaire that could adequately light the highways and footpaths on the island to provide a change in the colour temperature during the night. 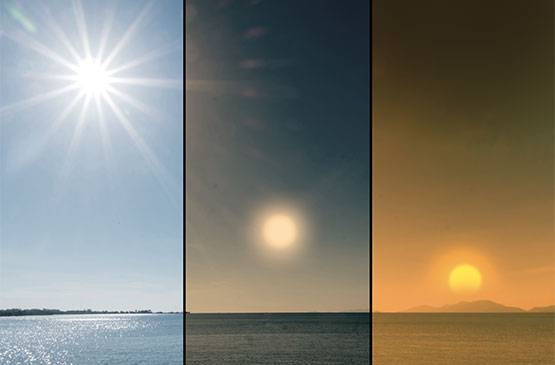 Professor Russell Foster, who led the pioneering team at Oxford University which discovered the eye’s third photosensitive cells has explained that that the non-visual receptor or the intrinsically photosensitive Retinal Ganglion Receptor (ipRGC) is responsible for melatonin release from the pineal gland,

In undertaking his research Prof Foster and his team at Oxford were following up on a discovery back in 1923 that the pupils of blind mice still responded to the presence of light.

The idea that, if the rods and cones weren’t doing the work, something else must be, led the team to the discovery of the ipRGC which, in turn, led to the linkage between light and the effect that it has on our body clock – what we now all know as the circadian rhythm.

Further study went on to identify the light conditions that are necessary to trigger the ‘melanopic response’ within the pineal gland and that Blue light, as we get on a bright summer morning is key to resetting our body clocks and ‘kick’ starting the day

Much work has been done on this for interior lighting, but this project takes the approach to the outdoor highways environment for the first time.

The location is a busy arterial route to the island suburb and has the usual two-lane highway, running parallel to a mixed foot-path and cycle-path. Helsinki required a minimum average of 1cd/m2 (EN13201-M3) on the highway and 7.5lux(P3) on the cycle/footpath to be achieved at any given colour temperature from 3000K to 5000k. The existing 10meter high columns were positioned about 35metre apart single sided on the non-footpath side of the roadway.

To achieve this performance some additional work to a standard Ignis2 luminaire was required. 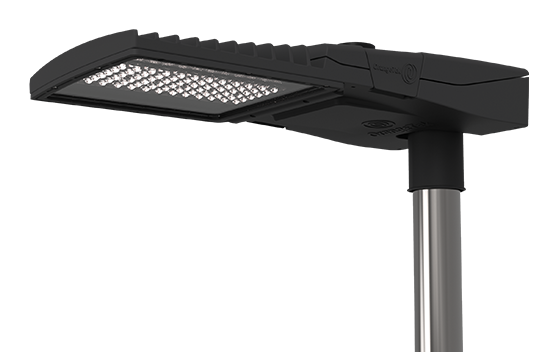 OrangeTek developed a unique solution that would provide the right lighting standard regardless of what colour temperature setting was used at any time of day or night.

In addition to the unique configuration and colour change, dimming was also required during the night when traffic is very low and thus make energy savings beyond that achieved by changing from the existing from 250watt high pressure sodium lamps.

The configuration agreed for the first installation follows with options for dimming levels and times:

With the following colour temperatures during the hours

The colour changing function was controlled by a wireless DALI enabled smart city node which allowed real time adjustment and feedback to adjust not only the lighting levels but the Correlated colour temperature of the lighting down to the minute.

The lights were installed earlier this year. together with the C2 CMS system onto the existing lighting infrastructure. The installation and testing was easy and straightforward with the shifting colour temperatures seamlessly blending to the required outputs. As the nights are still short, the real test will be the first winter, when the lucky residents will be some of the first people in the world to benefit from this human-centric approach. 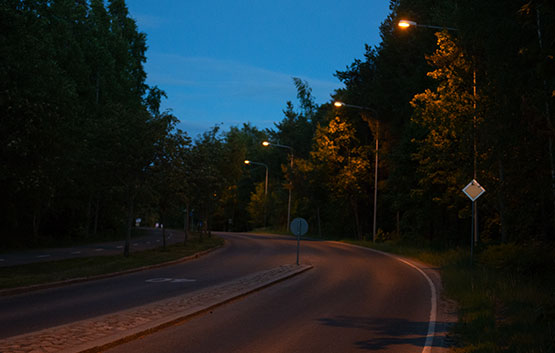 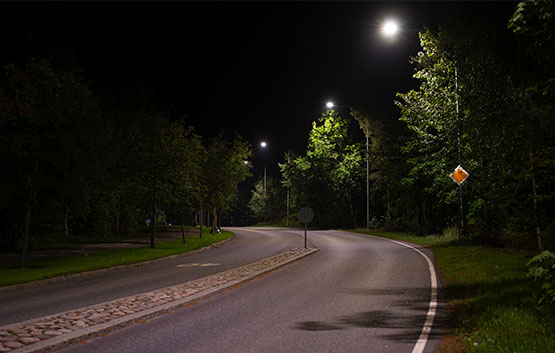 “We have worked with OrangeTek to provide this Human centric lighting scheme as part of our lighting strategy in this picturesque part of Helsinki. Multiple parties have worked closely together to deliver this key project and it has been a good journey together.

The new Led streetlights glide from the different temperatures  through the hours of darkness to produce  a changing hue to the environment in line with our plan and support the circadian rhythms of the residents.

Special lighting, like facades, sculptures and light art is only 1% of what we do, but we produce normal street and park lighting something like 99% percent of our time and so we have also to focus its quality. By doing that, we perhaps learn to see our residents real needs. There is already some good feedback, which never happens in case of “normal” street lights. We very much like the new lights and look forward to working together with OrangeTek again.”

Need help with your lighting challenges, request a call back