By the late 1960s, the Surrey Docks were in decline and the canal, having fallen into disuse, had become polluted and by the early 1970s the canal had been drained and filled.  The Peckham spur is now a pleasant green walkway.

The walkway was then lit with period lanterns on cast columns using 100 watt Son lamps as was the default at the time. However, time has taken its toll on the equipment and there were several faulty lanterns and a recent structural survey found a number of the columns had deteriorated and needed replacing, however the majority of the columns were deemed fit for re-use and lantern upgrade.

Due to the high number of users, being both cyclists and pedestrians, it was agreed that BS5489 P3 class was required, this being an average of 7.5 lux with a minimum of 1.5 lux. This was deemed enough to allow safe passage of even the quickest cyclists along the pathway.

To retain the same appearance, period columns with ‘square’ replica gas lanterns were to be used and the Southwark Lighting team scoured the lighting industry to see what was available and decided the OrangeTek Boleyn lantern offered the best solution.

A total of 65 black Boleyn lanterns were installed, each fitted with 36 Osram LEDs with a wide lens variant at a CCT of 3000K for a warm look to the light, providing a uniform well-lit route for all users. A warmer light source colour was considered but with quite a large amount of anti-social behavior around the Peckham basin end of the scheme it was felt 3000K would be a good choice.

These Boleyn lanterns were also fitted with 7pin Nema sockets and DALI drivers that has allowed Southwark to install CMS control that enables full monitoring and the ability to dynamically dim when the path is quiet, typically after midnight. 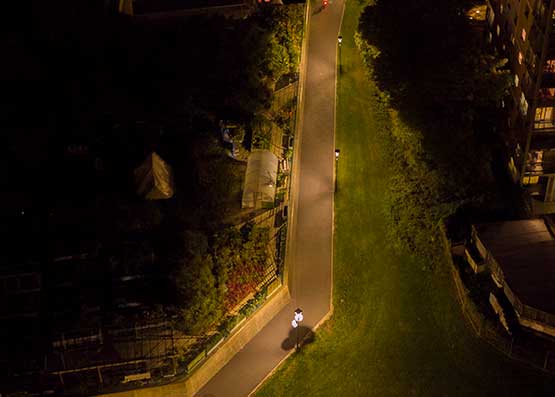 Switching to LED from Son has provided for in excess of 40% reduction in energy and CO2 use alone. When combined with dimming during the quiet hours of the night using CMS, this is increased to approximately 60%.

It is anticipated that substantial maintenance saving will be forthcoming from reduced planned maintenance and notably reactive maintenance in this particular area.

Antisocial behavior has noticeably decreased and the crime figures for the area have shown a drop in excess of 10% compared to the previous year.

“I am very impressed with the product and have had numerous members of the public giving positive feedback, which is very rare in the world of LED installation.

We were able to capture some great images not only from ground level but also using drones to capture our before and after shots of the lighting swap out.”

Need help with your lighting challenges, request a call back